As some of you know, I work for Pelagicore. We do in-vehicle infotainment using open source, Linux and Qt. I’m not in Las Vegas right now, but a whole bunch of colleagues are there, showing of at CES.  This year, we’re doing loads of demos together with various partners. We demo together with Visteon (makes infotainment hardware, and more), Digia (makers of Qt), GENIVI (infotainment platform standardization organization), Cinemo (media indexing, rendering and streaming) and Rightware (cool 3D UIs). 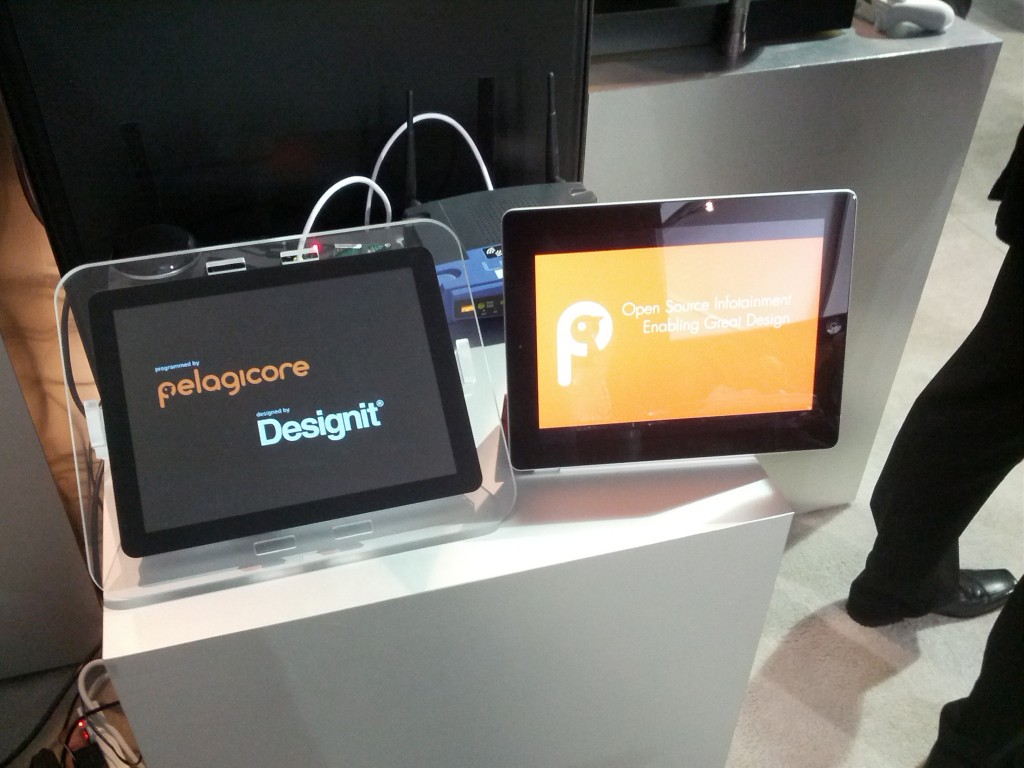 One of the fun parts of working at Pelagicore is that you get to see cool hardware. I’ve personally worked with Qt on Intel prototype systems, Freescale iMXs, TI’s OMAPs and more stuff that I can’t mention. This year’s demo setup for CES is based on iMX6. The UI has been developed with DesignIt, our design partner company. Let’s face it, those who enjoy coding generally do not excel at polishing pixels. With their help, we’ve been able to make something really beautiful. The picture I’ve got of the UI itself does not say much of the look and feel, but it has a nice reflection of my kind colleague taking the photos, so I’ll use it to say thanks to him and give some credits ;-). 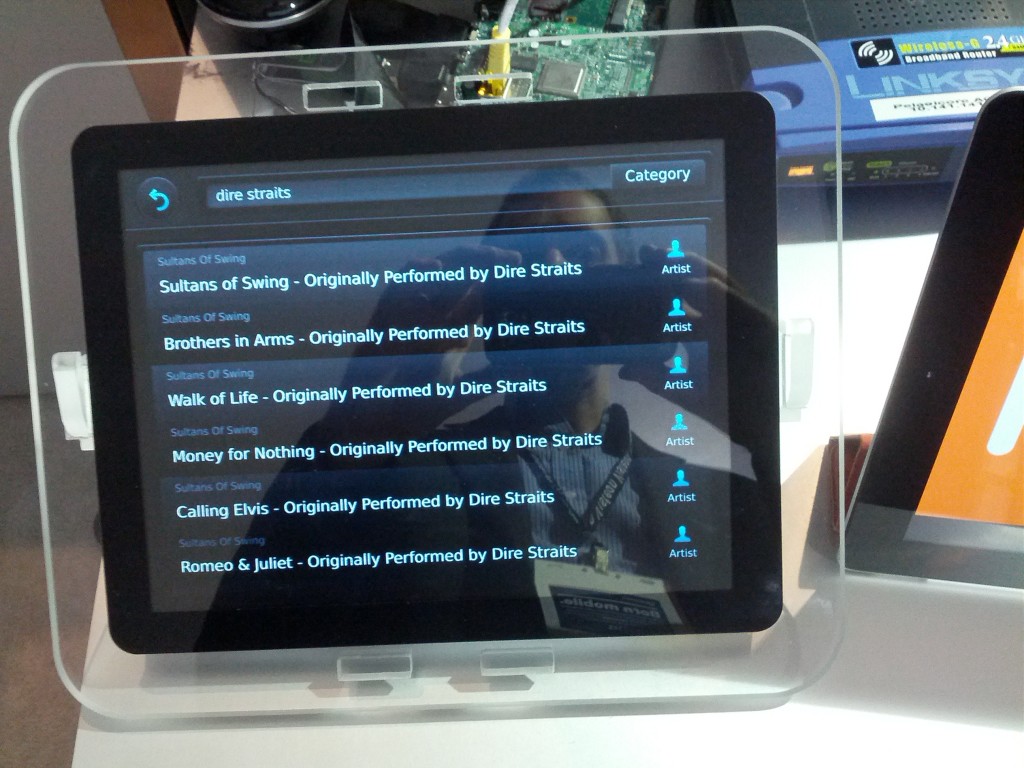 The demo is built around Qt and QtQuick (what else is there :-P) on a Linux platform. It integrates our core platform with all the services you might need. For CES, we have some new stuff in there. I have been involved in the integration of technologies from two other companies.

First, we have Righware and Kanzi, a nice 3D engine with an easy to use studio to create the scenes. The car shown below spins around as you change position with nice lighting and material effects. The demo is integrated as an element in the QML scene, and it is possible to bind to and from Kanzi properties, as well as hook into events from Kanzi UI elements, e.g. 3D slides and buttons. 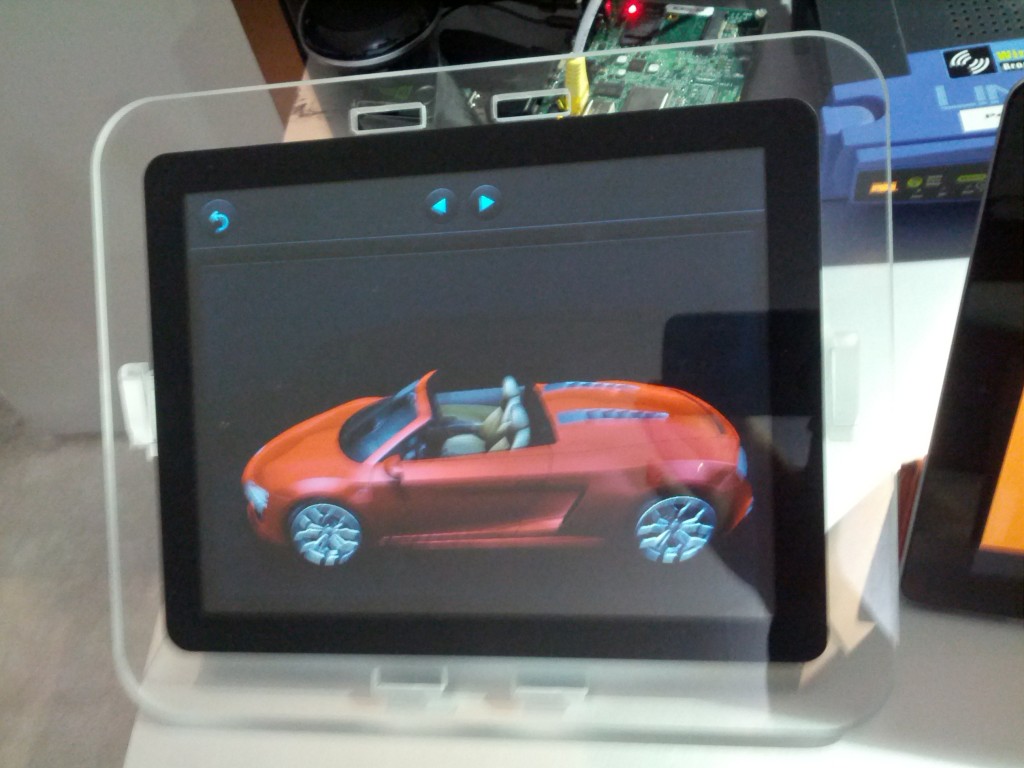 The second piece of technology is Cinemo’s media platform. It indexes, renders and streams video and audio. For instance, you can sync multiple devices showing the same video stream, so that you can share the audio through the main speakers. Again, the video stream is integrated into the QML scene, so you can do all sorts of fancy things with it. The images below show an iPad and our demo system sharing a video stream. As you can see, you can control it from either device, and they are always in perfect frame sync.

From a business standpoint, I guess CES is one of the highlights of the year. We really get to show our stuff to a large audience. However, since I’m not in sales, to me it means overtime, but also having a chance to work with companies making awesome technology. Also, as an added bonus this year, we got to work closely with our team of former Trolls based in Munich, which always is good fun.

So, to all of you at CES. Come visit our demos! To the rest of you, look our for our platform in your next car!

I’ve got a Raspberry Pi since a while back. I placed an order the morning the Pi was released. However, I also have a newborn and a four years old, so progress on the Pi has been slow. Now, finally, I have a setup that I’m pleased with.

I use my Nokia N900 charger, a non-name powered USB HUB, and a d-link DWA-131 wifi USB dongle. This page is a great resource for selecting periphials. The only draw-back right now is that the HUB and Pi draw power using separate supplies. Sharing a single 5V feed would reduce the need to free wall sockets from two to one :-)

For casing, I use a self-printed Raspberry Pi case with GPIO-access. However, I’ve not had time to fiddle around with the GPIOs just yet. The case fits nicely onto my noname USB HUB, so I’ve joined the two using a piece of velcro. The look is not very stylish, but the packaging is nice.

For software, I use the Raspbian image featuring debian built for armv6 with hard-float. I also use the qt50-snapshot from here (look under nightlies). That image is missing qmlscene and qmake, so for development, I guess I have to setup a cross compiler, or spend 4-5 days compilation time building a Qt 5 snapshot on the Pi myself. Not having qmake is sort of ok – compilation times are bound to be long, but qmlscene would had been nice, to be able to do local QML development.

I’ve had Qt 5 working from a snapshot for Debian wheezy with softfloat which had qmlscene pre-built. The framerate is nice, so it felt as if there was true potential there. I’m looking forward to being able to build my own little C++ QML extension and try it out for real.

I’ve decided to bread life into an old domain, but let me tell the story from the very beginning. Way back, when leaving university, a couple of friends of mine and myself went looking for a place to keep our projects, personal homepages (yes, we geeks had those back then – sort of a facebook profile, but without the centralization and games). The end result was that we bought the domain digitalfanatics.org and some hosting.

The years passed. From my side, I ran The Independent Qt Tutorial there. Got a job, wrote a book, got a Qt job, etc. For the others, life also progressed. In the end, the result was a site with a broken wiki installation and outdated contents. So, I decided to take over the domain and do something about it.

During the time that passed, I became a software guy. There is no point trying to resist that any more. I did study electrical engineering – microprocessor architecture, digital construction, etc – but I ended up a software guy. Now, I happen to have an urge to explore and write about things. This turned into a plan – Digital Fanatics would be a place where I could write about electronics and cool projects.

The site has been running for about a month now, without any promotion apart from myself twittering now and then. Still, the average reader count has increased to 50+, and the peak day had more than 100 unique visitors. This is far better than I expected and a real inspiration to me.

So, for those interested in smaller system, preferably open source, and such, feel free to visit the new digitalfanatics.org. And, yes, it will still host The Independent Qt Tutorial. It draws an amazing amount of traffic (1000+ daily hits) despite being Qt 3 – I really should find the time to update it for Qt 5 :-)