>This has been a great day. This week I’m faced with major deadlines Tuesday, Wednesday, Thursday and Friday. Today I was able to move the Friday deadline to Sunday, complete the work needed for Tuesday’s and Wednesday’s deadlines and got to know that the draft I delivered for Thursday’s deadline was good enough – so it will only be an approval of my text put in a standard formatting.

A great day. Hope that this will be a great week.

>I just wanted to show you some of the collateralls that Trolltech brought to the Quickstart last week. Lots of nice material – much with focus on Qtopia which I find interesting. 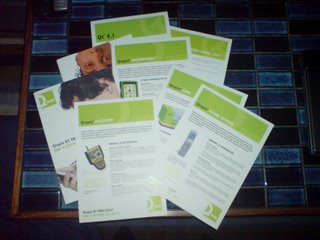 I felt that one fair was not enough for last week, so I also visited Electronix Scandinavia as well. Since I’m easily amused I took the chance to go Tux-hunting. First was an all alone Tux by some pens and candy. 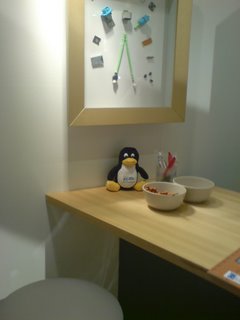 There where more Tuxes out there, but some guys actually brought wooden Gnomes. They did, however, not know of GTK+ so there must have been some misunderstanding :-) 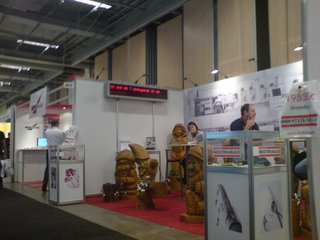 I was at the fair the last day of three, so some exhibitors where a bit tired. The Solitec guys seemed tired of customers – they did not even look up from their mobiles. I wonder if they where playing single player, wireless multiplayer or just checking their mail? 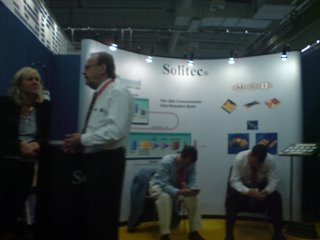 Just before leaving I found the booth shown below. Yes, their company name starts with five As. That is AAAAA. I guess they tried to appear first in the fair catalogue – too bad 3M was there :-) 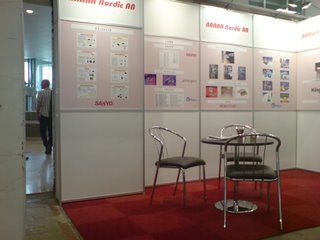 >Ok, so Advogato is going read-only and I’m moving to Blogger – but with my own hosting. It is a bit sad to move away from Advogato. The site was kind of nice, with its plain-text log. Before its time, and now falling into history. All my old entries are available from here, and I will not bother to move them to Blogger.