>First of all, I just want to point out Witold‘s Qt 4 video tutorial – great stuff! He really aught to be syndicated to PlanetKDE.

A few days ago – probably more than a week – I received a copy of Ezust’s book on Qt 4. 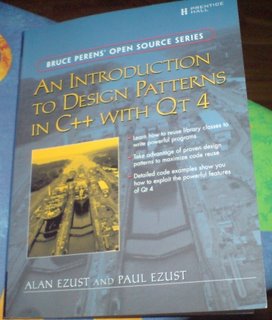 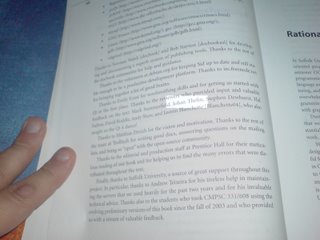 It is great for the ego to see one’s name in print!

>I just wanted to say thanks for a great time to everyone at XDIN. On Monday I start working with Bitsim – to them I just want to say let’s have a great time!

>It is seldom that I get really hocked on some piece of technology. FPGAs, formula one and Qt has been able to really get my attention this far. Today I tried a new candidate in that list: pandora. The Pandora Internet Radio is really amazing – the kind of indexing they’ve done of the music is really amazing. I really hope that they can arrange for broadcasting rights withing EU ASAP because I really like it.

>After some googling and trying I managed to fix the issue with “Using “. Apparently the installer of Opera 9.02 manages to set a value for the registry key HKEY_LOCAL_MACHINE\SOFTWARE\Microsoft\Windows\CurrentVersion\Explorer\AutoplayHandlers\EventHandlers\ShowPicturesOnArrival\(default). To fix the issue, simply select the (default) entry and delete it. You should get a new (default) but without a value. This removes the odd text.

Apparently Opera 9.02 seems to be the cause of my problems with the mute keys not working either… so much for a browser with integrated bittorrent support for Windows. I guess I’ll just have to find another client instead.

>I consider myself careful – I always use virus protection and a firewall, never running strange applications. Still, I share the computer with others and now there seems to be something strange with my Windows installation. 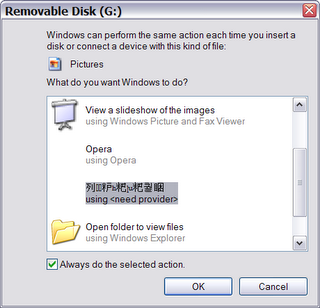 Can any body explain to me what the highlighted item is, how it got there, the implications of it being there and how I remove it. Thank you.

>Someone cut of my phone line yesterday. This means no ADSL and no telephone for the next 2-3 days. I can tell you that this somewhat limits my planned activities, but I get to be productive in other areas in the mean time.

>I just read the the people behind KDE interview with Jaroslaw Stainek and discovered his site kdelibs.com. I was aware of the project and I’ve experimented with Q..3 for Win32 in the past. What surprises me about Stainek’s project is the maturity – it seems to be useful even though the site states that “kdelibs4 on Windows is not stable” but that is not really a Windows issue as KDE 4 is in early development still.

And now for something completely different…

While cleaning out an only laptop of mine I found a link to Paul Bourke’s site. This is one of the most useful, informative and entertaining sites I’ve ever visited. I have recommend his gallery of fractals (with code and explanations behind each image). His curves and surfaces must be a dream to any maths teacher looking for a good overview of what is available. I still remember having written my first raytracer (only rendering spheres) using his geometry page and Phong’s model for reflections.

>There has been quite alot of activity in the Qt 4 IDEs arena lately. QIde has been renamed to QDevelop, Cobras has been released and QDev has been discontinued, but is followed by Edyuk.

Before I continue I would like to emphasis the cross platform aspect of the IDEs. To me, this means being available for atleast X11/Linux/gcc and Windows/mingw. It also means not being a KDE application that can be compiled for Windows + Mac – the aim here is to support Qt development on Qt’s platform. Not moving KDE to new platforms.

QDev/Edyuk is, to my knowledge, the oldest project of the three. The last QDev release dates back to February 2006 while Edyuk has blog entries dating to October 2006. The project was started by FullMetalcoder of QtCentre, and he still maintains it. The pcroject seems somewhat incomplete, but has interesting features such as an integrated version of Designer.

QDevelop is developed by Jean-Luc Biord of qtfr.org. The project was first released in June 2006 and has already a working plug-in system, a class explorer, code completion, project management and debugging support. It uses ctags, gdb and Qt 4 and can be run on Windows and Linux. The project does not integrate Designer, but invokes it as an external application.

Cobras was released just yesterday by Piotr Pszczolkowski. From the projects homepage is looks as if is it is a simple code editor that can handle qmake’s pro-files and can build n’ run the resulting binaries. The class explorer does not seem to be working, but the application seems stable enough. I could not find a way to edit the actual pro-file, but that might just be me. There are no notion about working cross platform on the site but I can successfully run it on Windows.

To summarize my impressions, QDevelop seems the most mature while Edyuk has some interesting features (such as integrating Designer). Cobras currently seems to be a pro-file aware text editor with integrated compilation. My hope for the future is for more cooperation. Having lots of paralell projects is a normal way to try architectures, but hopefully the developers can agree on one platform and focus their efforts there.

Update! Nicolas kindly pointed me to the new site of Qt4DS, now known as MonkeyStudio. This is one of the oldest Qt 4 IDE projects (competing with Edyuk) and seems quite mature. It has project management, code completion as well as translations. When it comes to translations it has got a really interesting approach and seems to be supporting this better than any of the other alternatives.

>I have just been on my first paid Qt assignment. I visited a Norwegian company in Horten and helped them for three days. Thanks alot Lappen and Mohal at Trolltech who gave me the chance to try my abilities in a professional project!

>Witold blogged that he has published a new version of his Chart classes for Qt 4. They are based around the Interview framework and look really promissing. He has been doing some really interesting things with Qt 4’s support for MVC programming – just look at his OpenGL + MVC articles. It looks very interesting to me. For those of you not familiar with Witold, he is one of the leading members of QtCentre.org – and I would love to see him added to PlanetKDE.

The second new is that my RSS reader – Google Reader – has been updated. The interface is still a bit hard to get used to for me, but it looks like a change to the better. The primary reason for me to use Google Reader is that it allows me to check all my feeds from my mobile phone – a great feature for bored geeks :-)